When I heard that there was going to be a fibre festival in Vancouver, I was pretty excited, as you may imagine. When I found out that Kate Atherley (wisehilda), Kim McBrien (indigodragonfly yarns) and Felicia Lo (SweetGeorgia Yarns) were going to be there as well, I was doubly excited and started planning how I was going to make it happen. Initially, I was going to go over just for the marketplace on the Saturday and head home again. Now, we live on Vancouver Island, a 1.5 hour ferry ride and 45 minute bus ride away from Vancouver. The venue was further away than that, so I/we would probably be on the first ferry in the morning and be heading home on the penultimate ferry. All doable so far. Then I heard about the Kick-off party planned for the Friday night, where vendors, attendees, volunteers would be gathering for some pre-show relaxation and to hear talks by KP Werker and Sylvia Olsen. How could I not go to that?? So then the planning began! We have two young daughters who were delighted with the chance to stay with grandma, and she was happy to have them, even though her best friend in all the world was arriving from England on the Saturday afternoon.

You might begin to understand my excitement about all this when you know that I test knit for Kate and Felicia, communicate with them on Twitter and had never met them in person. I knew they would be really busy during the show itself and this would be a good opportunity to meet them – and ask Kate to sign my copy of her book! I know, I know, it’s all a bit fan-girl!  There was also the fact that I had borrowed Sylvia’s book, Working with Wool, from the library three times in a row and I really wanted to hear her speak. Better yet, if I could get hold of a copy of her book, I had a wonderful Christmas present sorted for my Mum! I was also very keen to meet Kim from indigodragonfly, as I have been coveting her yarns. There were many other people that I wanted to see, but these four were what spurred me on.

To cut a really long story short, my husband and I headed over to Vancouver for the party and to attend the marketplace on the Saturday. I took 4 hours to get from our house to the hotel, where we rested briefly before heading out to Commercial Drive to the venue, which was much larger than I had expected. I was very glad he was with me, as I don’t know Vancouver at all and my days of travelling around a big city are long behind me. Of course, being very keen, we were a bit early, but it turned out I knew one of the volunteers and also got to talk knitting with other people that were there. The talks were excellent, the turnout was fantastic and it was wonderful to be in a room full of people who share my passion for fibre and yarn and making things with it!

The fabulous Amanda and Fiona, the organizers of the show, went above and beyond in helping me get hold of a copy of Working with Wool through Baaad Anna’s, a yarn store in Vancouver. Sylvia signed it for me and I can hardly wait for Christmas now, so I can give it to Mum, who will be as thrilled as I was!

I know I am name dropping, but over the weekend I met Kim McBrien, Felicia Lo, Kate Atherley, Kim Werker, Sylvia Olsen, Amanda and Fiona, Jane Richmond, Shannon Cook from luvinthemommyhood, Trish Moon from Indigo Moon Yarn, Richard and Elizabeth Ashford (!!), Liz Abinante aka Feministy, plus many other warm and wonderful people. I wish we had taken more photos, but I was too excited and taking everything in to really think about that! We even arrived early enough to get the ‘swag bag’ available for the first 50 people through the door! Yes, my husband is truly wonderful for his support and … endurance! 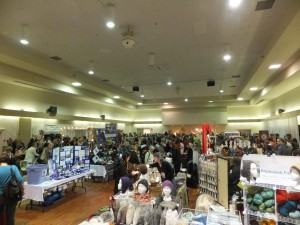 Of course, no matter how much yarn I buy, I always wish I had bought just one more! At least one more. Now I think of it, there are at least three more skeins I would have liked to add to the collection. We also saw a wonderful carder and a loom that might eventually become part of the textiles equipment in our home! Here’s a photo of Elizabeth Ashford helping me with a little bit of weaving: 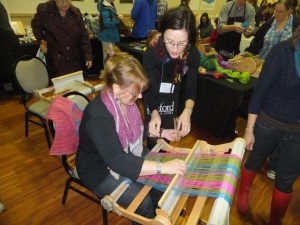 Me with Elizabeth Ashford, weaving on a Knitter's Loom

Richard and Elizabeth own the company that makes the world-renowned Ashford spinning wheels. I’m the proud owner of an Ashford Traveller, so it was a real delight to meet them both. Richard was demonstrating a wheel that is for spinning very bulky weight yarn and asked if I wanted to try. I normally knit with laceweight, so that is what I spin. Trying to spin bulky is not so easy after months of spinning very fine yarn, but I tried! 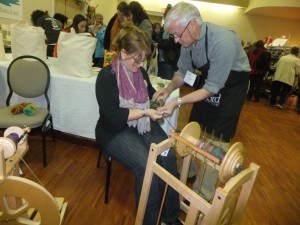 Me with Richard Ashford 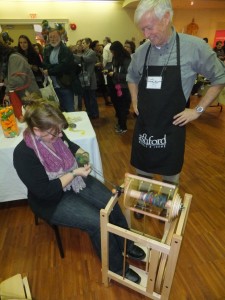 Me with Richard Ashford

You may notice that I am wearing a particularly lovely shawl. It was the Roses, Roses wrap designed by Lynette Meek and this was its first outing, after being on display at Mad About Ewe. It is a truly beautiful piece and I was really proud to be able to show it off. 🙂 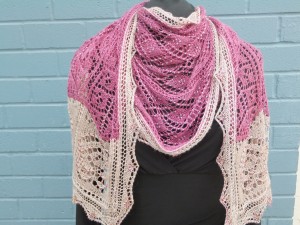 All in all, it was a fabulous outing and I’m already looking forward to the next one. I might even take a class next time, but for now, I’m heading to my happy place next to my yarn collection!

This entry was posted in knitting, showcase. Bookmark the permalink.